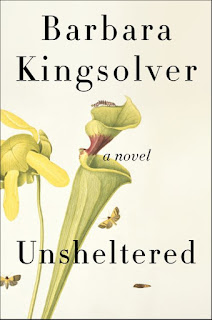 This is the latest novel by Barbara Kingsolver, I usually really like her books, and so far this is a good one too.

This book alternates between two different stories, both set in the same house in Vineland USA, but one story is set in the time of Charles Darwin in the 1800s, where the debate between the established religious belief and the new scientific theory of Evolution was hugely controversial, and the other is set in current times, where despite the author's statement that "among the novel's twenty-first century characters, any resemblance to persons living or dead is coincidental" there are quite obvious references to Trump as "the Bullhorn", a Billionaire running for President that boasts he could shoot someone on 5th Avenue and people would still vote for him"....etc.
The underlying theme is to showcase the similarities in the incredulous reaction to evolution in the 1800s and how 'head in the sand' many people were in the face of what we now see as obvious, and the current situation we face with severe effects of global warming on our doorstep and the inaction and denial of it by many of our political leaders. Barbara Kingsolver was a biologist before she became a writer and I'm sure it's one of the reasons I love her books so much, they are great human dramas, well written, but with important underlying messages embedded. This one has climate change and sustainable living and evolution woven throughout, plus a fair measure of equity for women. Science Communication by subtle and powerful means through a novel.

I was only slightly disappointed by the ending or I would have scored it 9-10/10 instead of 8.
Posted by HappyHobbit at 1:23 AM