"The Bean Trees" by Barbara Kingsolver 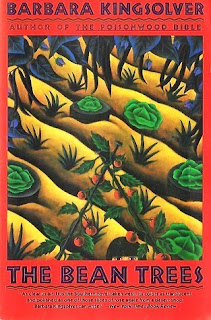 This is the 3rd book by Barbara Kingsolver that I have read, and I have enjoyed them all. This one is a lot shorter than the others I have read so far. I really enjoyed the writing style, I felt I was there observing everything and hearing the characters voices and accents rather than just reading about them. The story follows Missy who buys a dodgy old car and sets out to drive until it breaks down then start a new life there, where ever that might be. It's like escaping from this small town in Kentucky is the only way to prevent becoming just another pregnant teenager with nothing much exciting to look forward to. She changes her name and becomes Taylor, and almost ironically given she's running away from the idea of becoming pregnant, she is given an Indian child at a roadhouse along the way. It seems a bit far fetched at this point but later it becomes apparent she is helping to rescue the child from an abusive environment. Her car ends up needing new tyres in Arizona which she can't afford, and while stopping to earn enough money to replace them she ends up starting a new life, with new friends and 'Turtle' her little Indian child. The second half of the book focuses on the relationships she forms with her new friends and neighbours, issues with bringing up Turtle without being her legal parent or guardian, and touches on illegal immigration issues, with one of her new friends sheltering a Mexican couple. While the writing is great and I kept turning the pages, things seemed a bit more superficial/cliched and predicable for the last part of the book. I read somewhere that the author also grew up in Kentucky and moved to Arizona, and the way she describes the country and the people probably draws on her own experiences as they are so realistic (particularly in the first half of the book I thought).


2016 will be the 4th year I have taken part in the Aussie Author Challenge hosted by Jo from the Book Lovers Book Review blog. I really recommend it, as it exposes you to a lot of new Australian authors and books that you might not otherwise think to read, and often they are very well written, on diverse topics and thoroughly enjoyable. I have a lot planned for 2016, so at this stage I am going for the Wallaroo level of the challenge (Read and review 6 books by Aussie authors, at least 2 by male authors and 2 by female authors and from at least 2 different genres). Depending how the year pans out I may upgrade to the Kangaroo level (12 books, and more categories). 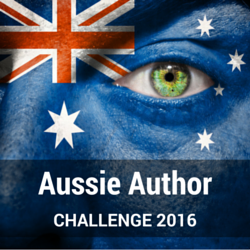 For more info and to join up too, see the Challenge info on Jo's Book Lovers Book Review blog.

"Born to Run" by Christopher McDougall 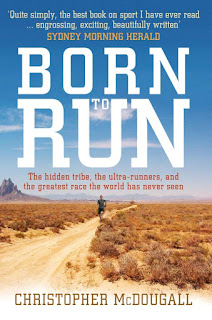 I found "Born to Run" by Christopher McDougall to be a really interesting book. Mid/late last year I started to get into running. By 'get into' I mean go from not being able to run 500m without stopping and wondering why I was torturing myself, to happily running 10-12km at a time without stopping a few months later. I quickly became addicted to running, something I never thought would happen, even getting up early in winter to go for jogs before work. Then October to December I had to stop running due to an injury and I was surprised how much this really upset me. I'm only just getting back into jogging short distances again now, but hoping I'll be able to complete my first half marathon this year.
Anyway, I digress. I found "Born to Run" to be quite fascinating since I am a newly addicted jogger. It might not have quite the same appeal for people who hate the idea of running. Christopher McDougall is a journalist, and his style is often a bit too hyped up in some places and  a bit matey-matey in other places like he's telling you his life story and the history of ultra marathons over a beer or 10, but despite this it was an easy, interesting and compelling book. While the main focus of the book is the isolated Tarahumara tribesmen of Mexico who are famously amazing ultra marathon runners, there are lots of side stories going into the history and evolution of running, different running styles, different sports doctors and ultra marathon runners anecdotes and achievements etc. The book really brought to life some places and running events in North and South America, taught me a bit about the Tarahumara tribes, and gave me lots to think about long distance running. It was also quite inspiring and wonderful to read a book written by someone expressing the simple joy that running brings, even to a newbie like me.