"A Feast for Crows" by George R. R. Martin 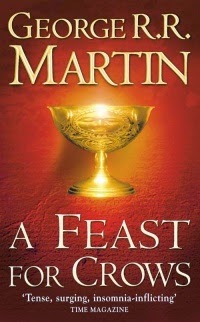 I've got a pile of books I want to read, including some more for the Aussie Author Challenge, but the 4th series of Game of Thrones has arrived on Foxtel and I'm worried about hearing spoilers on facebook or at work. I really prefer to read the book first and let my imagination develop the characters, then enjoy the film version after...rather than watch the film version and let that impact on my imagination as I play catch-up on the book. So I've started the 4th book of Game of Thrones on my kindle tonight.

It's a big book. My review will appear here once I've finished the book. Could be a few weeks...

Another awesome and addictive book in the Game of Thrones series. I wont give much of a review as this is one of those series you either absolutely love, or absolutely are not interested in...if you are interested in complex, gripping fantasy worlds then you will love Game of Thrones, and really need to start at Book 1 and work your way through the series, while trying to avoid spoilers from friends/media/the tv series etc. My only frustrations with book 4 was the number of new characters that were introduced in the beginning of the book when I just wanted to connect back with my favourite characters to see what was happening to them....and then to find out the author had decided to just follow the story of half the main characters in book 4, and the other half will be followed in book 5. But really it's the sort of happy frustration caused by being immersed in a world so complex and realistic and full of characters that there just isn't enough room for them all in one book...now I'm torn as I want to leap straight into book 5...but since book 4 took me over a month to read, I should probably take a break and read something that contributes to the Aussie Author Challenge.
Posted by HappyHobbit at 3:54 AM No comments:

Accidentally put my kindle into my checked in luggage this weekend when flying back from Sydney, so I splurged and bought a new book from an airport book store. I chose "Mister Pip" by Lloyd Jones, a New Zealand author. I didn't know a lot about the book before I read it, but I vaguely remembered seeing a movie trailer for a film version of it that I thought looked good.

Mister Pip has an obvious connection with Charles Dickens "Great expectations", being the main character in that book. I'm a bit ashamed to admit I have never read "Great expectations", sometimes the classic books are a bit of a mission to read for me, but I am probably more likely to consider reading it now that I have read "Mister Pip". "Mister Pip" is not set in 1800s England, but rather in Bougainville, a tropical island during a (recent) time of horrific civil war. The book could be described as a fable, and it is told from a child/teenagers point of view - Matilda, who grew up in this island community. The children on the island attend a school, which is taught by the token White man on the island, Mr Watts, who appears to be a bit of a recluse and not really a teacher, but during times of civil unrest he is the best version of a teacher the community has. He starts reading "Great expectations" to the kids, and captures their imagination and helps give them some hope and focus in the midst of a time of insecurity, unrest and hardship. Then the soldiers and rebels enter the village, and things get even worse. I'm not sure if it's just me, or whether the story being told as a fable and expressed in the innocent words of a young girl made the impact more shocking and horrific, but some of the violent scenes that unfolded in the last 50 pages of the book absolutely shattered me. Without giving things away, it was unexpectedly tragic and horrific, even more so when described from the point of view of an innocent 15 year old girl.

It is clearly a very well written story, mostly uplifting, but with some severely horrific scenes scattered throughout. I felt pretty flat after the ending really. I think I will be remembering this book for a long time though.