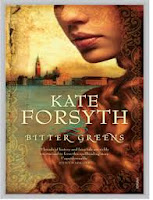 I read this book as part of the Aussie Author Challenge 2013.I like historical fiction in general, and also have a soft spot for fantasy and fairy tales, so after reading some online 5 star reviews of this book (e.g. this review on the Book'd out blog that I enjoy following) I thought I was on to a winner. However I was quite disappointed overall, and have given this book a score of 5/10. The book is basically told from 3 different women's points of view; Rapunzel (Margherita), the evil witch (La Strega) and a controversial French noble woman (Charlotte-Rose) from the Sun King's court. None of the characters really grabbed me, although the witch was the most interesting of the three and I would have liked to have heard more from this character, followed by Margarita, and I never really understood the point of Charlotte-Rose's character apart from to add a bit of a '50-shades-of-grey' tone to the book. Parts of the book were entertaining and interesting, and I did like the creative re-telling of the traditional Rapunzel story. However, the overall vibe for me was a teenage infatuation/romance story with a bit of historical fiction and fairy tale flavour thrown in. To me this was equal to the lower end of Jean Plaidy's spectrum.

"People of the Book" by Geraldine Brooks

I read this book as part of the Aussie Author Challenge 2013. I found it to be a very interesting story woven throughout hundreds of years and delving into lots of countries and religions and fascinating characters. I really enjoyed this book, it is a very rich historical novel and appears to be very well researched with lots of tiny details from many countries, religions and ages. It's basically the story of a very special illuminated religious (Jewish) book that turns up in modern day times in Sarajevo, and the main character who is a kind of scientist who preserves and conserves ancient books & manuscripts comes along to study the book before it is put on display in a museum. The tiny bits of evidence she finds throughout the book from stains, to insect wings are all brought to life by going back in time to show you how those things came to be there, and how such a contentious book survived through wars and religious conflicts. I am an atheist, however I appreciate everyone's right to have their own opinion and beliefs and I also find it interesting to learn some of the history behind various religious beliefs and conflicts through time...so I found this book (which included aspects of Jewish, Catholic and Muslim religions) from the 1400s up until the 2000s very interesting and also very entertaining, the characters were mostly very believable, with just a few scenes/aspects of characters seeming a bit far fetched, at least to me.

This is the first book I've read by this author Charity Norman. It is the story of a family who leave the UK for a better life in New Zealand, and then how the "dream"/"nightmare" unfolds. It is very well written with good descriptions of characters and landscapes, and I have to admit I actually cried towards the end (I almost never cry reading books or watching movies so that's saying something). I must say I had suspicions early on in the book about who was at the root of the 'nightmare' and why, but this didnt detract from my enjoyment of the story unfolding, and I did find it quite a page turner. the reason it too me so long to read the book was no reflection on how gripping it was, it just happened to be a very busy couple of weeks at work combined with waiting for an electrician to fix the problem with the lights in my bedroom, so I didnt get a lot of reading done.
Being Australian, but having friends from both the UK and New Zealand some of the aspects of the book dealing with the family's assimilation after migration from the UK to New Zealand was really interesting, and the author did capture many of the local mannerisms and customs that seem normal to Aussies/Kiwis but seemed more foreign when seen from the UK family's point of view.  I am keen to read more books by this author, although since signing up for the Aussie author challenge I think I better try to fill in a few of the gaps in my Australian literature first ;-) I have heard from a friend that another book by this author "Son in law" is also very good. 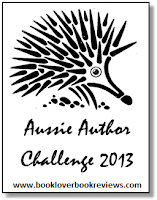 Earlier this year (in April), I decided to consciously try to read more books by Australian authors. At that stage I was not aware of the "Aussie Author Challenge 2013", but I participated in the "Australian Literature Month" which I heard about on the "Reading Matters" blog. April saw me read two Australian books, both by authors who were new to me at the time (Caroline Overington - "Sisters of Mercy" and M.L. Stedman "Light between oceans"). Inspired by the Australian Literature Month, I have continued to read quite a few more books by Aussie authors this year, and now that I have stumbled upon this "Aussie Author Challenge 2013" on the Book Lover Book Reviews website, I have decided to officially accept the Challenge at the Fair Dinkum level (see below). I'm hoping it is acceptable to include Australian books that I have read earlier this year as my intention to read more Aussie books and to discover new Aussie authors was the motivation behind reading these books, even before I heard of the Challenge today, and the books have all been read during 2013.

The rules of the Aussie Author Challenge 2013 - Fair Dinkum level are:

So far the books I have read this year which I am including as part of the Aussie Author Challenge are:

Posted by HappyHobbit at 9:15 PM No comments: 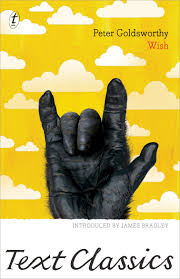 I read a review of this book on page 12-13 of the current issue of "The Adelaide Review" which prompted me to download it onto my kindle. This book is a novel set in Adelaide about a sign language teacher who teaches Sign to a gorilla liberated from a Melbourne research lab. This isn't a new book, but it has been recently re-released with a new introduction. Peter Goldsworthy is an Australian medical practitioner who also writes amazing books. I found this novel to be really interesting, page-turning, powerful, sometimes confronting which felt almost non-fictional in it's believability, exploring the boundaries between human and ape, language, intelligence. Unlike anything I have read before. It's also set in Adelaide (where I live now) so a lot of the setting is very familiar and makes the book come to life even more for me. This book, combined with recently seeing Adam Hills' live comedy performance translated for the deaf has seeded a desire in me to attempt to learn the basics of Auslan (Australian Sign Language). I thoroughly recommend this book.

"Inside of a Dog" by Alexandra Horowitz

In this non-fiction book "Inside of a Dog", Alexandra Horowitz (a scientist who studies animal behaviour and also a dog-lover) tries to give insights into what it would be like to be a dog, what senses and perceptions they have that are similar and different to ours, how they have evolved and been bred by humans to be our 'best friend'.


An interesting book, but overall disappointing for me. I expected a lot more from it. There were countless examples where the author  would describe some aspect or ability of a dog, then completely forget to apply that knowledge to another situation described in the book. E.g. the interesting ability that dogs possess where they can detect minute changes in chemical smells such as when a human has cancer, or can detect if you are sad by smell etc...then a bit later the author describes a 'clever' experiment in which dog owners pretend to have a heart attack and the dog ignores them, and she interprets this to be because the dog fails to recognise an emergency situation. I think it is more likely the dog realised that the person was not having a heart attack (in the absense of any stress/heart attack chemical signals) and that their owner was just fooling around. Anyway there were lots of examples like this that were a bit disappointing, but other bits were really interesting to read..and many that I would have liked to learn more about. On the positive side, I have found myself observing dogs when I'm out walking and looking at different signals I never noticed before reading this book.