"A Constellation of Vital Phenomena" by Anthony Marra 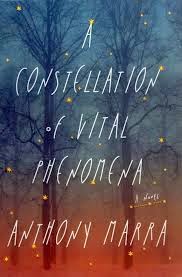 I chose to read this book as I noticed that it was given a 5-star 'must read' review on the Booklover Book Reviews blog. The interesting title also caught my attention.

I don't know quite how to describe this book. It is set during two separate times of war in Chechnya, during 1994 and 2004. It focuses on several different characters all caught up in the same conflicts in different ways. A talented female surgeon, her sister, a failed doctor who dreamed of being an artist, his neighbour the arborist and his 8-year old daughter, and a neighbour-informer and his old father. It actually took me a while to figure out that different chapters were dedicated not only to different characters points of view but also different time points. I'm not sure if it was just me that got confused by this, or if it was due to the kindle format I was reading as the start of each chapter shows a timeline from 1994-2004 and the year that the chapter will cover is highlighted in bold, but at least on my kindle edition the bold font was not much stronger than the rest of the font so I didnt notice until part way through the book. Might have been easier if each chapter just had the year, rather than a timeline with one year slightly bolder...My mistake though. And despite this initial confusion of time, I have to say this is definitely a '5-star must read' book. I didn't know a lot/anything about the Chechnyan conflicts despite them occurring fairly recently, so historically I found it educational, while the characters and their stories completely drew me in. It isn't a cheerful story, and there are sections that involve torture and brutality which I never find easy to read. Yet there are moments that are really beautiful in the book. I guess the main feeling I got from reading the book was how war and conflict can bring out the best or worst in humans...for some people it brings out unbelievable cruelty and hunger for power, others make choices to inform on neighbours or allow brutalities to occur through desperation while trying to protect people that are close to them, and yet others risk everything to save, protect and help others. I am thankful I have not had to personally live through such an experience where making those kind of decisions are necessary. I recommend this book highly.

"The Invention of Wings" by Sue Monk Kidd 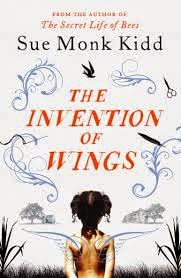 This book is written by the same author as "The Secret Life of Bees" which I really loved. "The Invention of Wings", although not quite as excellent as "The Secret Life of Bees", is still a really good book and I really enjoyed it. It is set in southern USA in the 1800s, during the lead up to the abolition of slavery. It is based on real events and real people, although it is a work of fiction. There are two main characters; Sarah Grimke, one of the daughters of a white rich slave-owning family; and Handful/Hetty, the daughter of one of the slaves owned by the Grimke family who is given to Sarah as a gift on her 11th birthday. Sarah (joined by her younger sister Nina as the story progresses) fight for the abolition of slavery and racial equality challenging their family and white society values of their era. The characters and the stories are really well done, and I was fascinated by many of the elements in the book that were based on fact. I still find it hard to believe that one race of humans can treat another race of humans so inhumanely and act as if they don't have the same kind of human rights as each other. Although often tragic, there are positive aspects woven through the story, and the courage and determination of the main female characters in this book are inspiring.

Posted by HappyHobbit at 12:28 AM No comments: 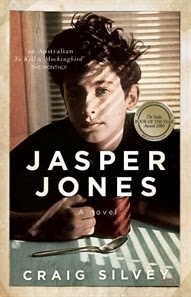 This book has been described as the Australian 'To kill a mockingbird', and has been shortlisted for and won some awards. I read it as part of the Aussie Author Challenge. I really enjoyed this book. The characters, the writing style, the storyline. I read the last two thirds of this book in one sitting while on a plane flight, it's one of those books that I didnt want to put down once I started reading it.
The book is set in a small town in Western Australia in the 1960s. The main character, Charlie Bucktin, is a quiet, shy, bookish 13-year-old kid, somewhat lonely apart from his best mate, a Vietnamese boy Jeffrey Lu. Someone you wouldn't expect to be mixed up in any kind of crime or unlawful adventure. But suddenly he is sought out by the village outcast, Jasper Jones, who has a notorious reputation of being the source of almost every criminal or delinquent behaviour around the village. In the dead of night, Jasper knocks on Charlie's bedroom window and tells him that he needs his help with something urgently, and Charlie becomes deeply involved with Jasper trying to prove his innocence in what appears to be a horrific and violent crime in the woods surrounding the village. I guess you could say the book is a 'coming of age' story mixed with crime/mystery elements and dealing with racial tensions and attitudes in Australia (both against Australian Aboriginals and Vietnamese residents in Australia during the Vietnam war). The book also has young romance in it, and comedic moments (often brought to life in the banter between Charlie and Jeffrey Lu). I highly recommend it.

Male author, New to me, unsure of the Genre: perhaps Young Adult Fiction?

Posted by HappyHobbit at 11:39 PM No comments:

"All the Names" by Jose Saramago 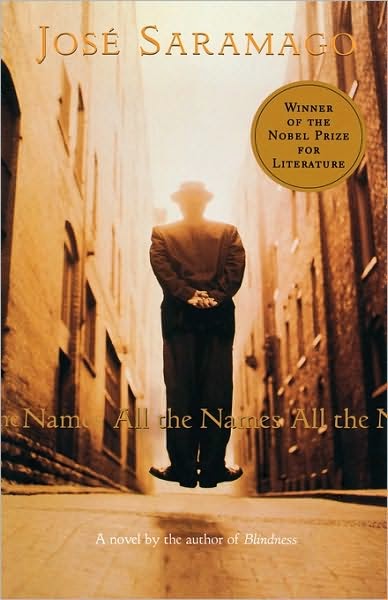 This book was lent to me by a friend. It is written by a Portuguese author who won the Nobel Prize for Literature in 1998. I'm not quite sure what to write down about this book. The writing style is very unusual, punctuation is minimal, it is very descriptive in places and other times very abstract. Some passages of the book I found fascinating and insightful, but other sections I just wanted to skip pages that seemed to drag on.
The story is about a clerk, Senhor Jose, who works in the Central Registry for births, deaths & marriages. The main character is a lonely character, living alone, next door to the Central Registry, and it appears that his work is his life, with very little else of interest to him. The story is told by Senhor Jose, often through dialogues he has in his head with himself, or with inanimate objects like the ceiling in his house, or imagined conversations with other characters he encounters in his life. He becomes fixated with an unknown woman whose birth, marriage and divorce are recorded on a card that he happens to pick up. He decides he needs to find out everything about this unknown woman, and sets off on a detective mission to track her down. For such an introverted, unadventurous person, Senhor Jose embarks on this adventure which includes breaking and entering, stealing, and all sorts of unusual and sometimes criminal behaviour in order to satisfy his curiosity about this anonymous woman.
Some aspects of the book I really enjoyed, at times the writing was beautiful, and the insights into the (mad?) mind of Senhor Jose are really thought-provoking. However, I did find some sections very slow and hard to get through.