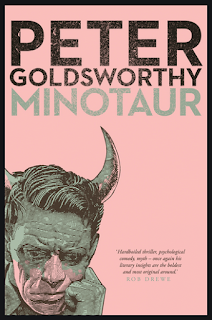 I find Peter Goldsworthy a really clever and interesting writer, yet my enjoyment of his books is very hit and miss. For instance, I really loved "Honk if you are Jesus" that I read about 15 years ago, and also found "Wish" to be a fascinating and unique story. But some of his other books I really didn't connect with at all, for example "Three Dog Night" and "Everything I knew".

In Minotaur there were lots of clever and interesting elements that I enjoyed, especially in the first half of the book when the concepts were introduced, for instance the main character, Detective Sergeant Richard Zadrow, is blind due to an injury sustained in the police force, and so throughout the book are interesting insights into not only the way technology can be used to help navigate the world (Siri is almost a character in her own right in this story), but also how critical sight is even in our language to describe everyday things e.g. reading expressions, face-value, reading my intentions, reading his mind etc.

I also really enjoy reading a book that is set in a place that I have lived in, where you can clearly picture the locations in your mind as the story unfolds. This book was set in Adelaide, where I have lived for about the last 15 years, and I really enjoyed how the descriptions of Zadrow tapping along the city streets could conjure up not just visual pictures but sometimes even the familiar smells and sounds, and give wider context to scenes as I have walked those same streets myself many times.

However, as with other Goldsworthy characters, I did not particularly like the main character and did not warm to him as the book progressed, in fact I grew less tolerant and more frustrated with his selfish, destructive and sometimes ludicrous thoughts and actions. E.g. there is a scene where the drunk blind ex-cop is driving his car being directed by another drunken passenger, he smashes into a parked car, they keep driving, they get pulled over and breath-tested by another cop who doesn't seem to notice the driver is blind and lets them continue driving down the street...the passenger passes out, then the blind man manages to continue to drive the car all the way home without further incident...the scene is described in a way that makes this sound like a great prank, but I have zero respect for people who think it's ok to drink drive and the idea that someone blind and drunk could drive seems quite over the top.

There is also another almost random section in the book where the author has his normally intelligent walking encyclopedic character, Willopedia, ranting and scoffing at a documentary on the effects of climate change on the low lying pacific reefs and islands. This really surprised me, partially as it seemed to come out of no where and not be relevant to the story, but also because Goldsworthy is a medical doctor, and even the Australian Medical Association and the World Health Organization recognise the significant challenges we face due to global warming.

There is also one scene later toward the end of the book that is very violent and seems to go on and on, I kept turning the page and thinking "oh come on how much longer does this have to go on for? Just someone die already or have the police or ambulance rock up and have done with it!" By this stage I almost didn't care whether the main character or his nemesis would be the one to die I was so over them both.

Clever, unique story, well-written, but unlikable characters and themes meant overall it was not my kind of book.

Posted by HappyHobbit at 6:27 PM