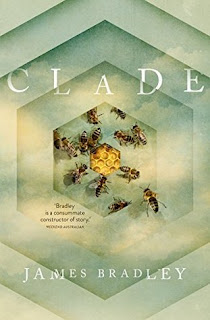 About a week ago I saw Lucy Treloar tweet about another book by James Bradley called "Ghost Species" that sounded right up my alley. Unfortunately when I looked it up to purchase it I discovered it appears she must have read a pre-release copy as it's not due to be published for a couple of months. Then I was at my local bookshop buying a book for a birthday present for a friend and stumbled across another book by the same author and thought I'd give it a go in the meantime. Plus I loved the cover art, and it mentioned bees so I thought if it's a good book my parents might enjoy it too as they keep bees.

I was really impressed by the scientific details and predictions brought to life in this story coupled with the way the author manages to capture human reactions to our changing world. It seems scarily prescient of the direction the world is travelling in, particularly if you read things like the 2019 IPCC Climate Report or follow respected independent climate organisations like Australia's Climate Council. While the catastrophic 'natural' events unfolding in this book at times may seem a little unreal and over the top, mostly they are along the lines of what is predicted by even moderate/conservative climate scientists and environmentalists today. What really brought the reality home was how many of these almost over the top scenarios are also normalised by the characters reactions to them, the way they acknowledge it's too late to fix things now the warnings were ignored and that these crazy extreme disasters really are "the new normal". When one of the characters is at a tropical rave party with futuristic glasses "overlays" that allow the user to see "dragons swoop and turn, their paths criss-crossed by birds and other magical creatures" it made my soul cry.

The book is broken down into different chapters, each one told from a different characters point of view. The characters are all mostly connected to each other in some way, but it's not always evident immediately what the connection is. Characters voices are children, teenagers, adults, grandparents. All dealing with the chaos and trying to live their lives with different levels of experience and perspective. It's a great way of telling the story from different points of view.

Probably the most unexpectedly eerie part of the book for me was when I reached the chapter  narrated by a Sydney-based teenager, Li Lijuan, which is written in diary format. Her Mum has gone to China to look after Li's sick aunt and while her Mum is over in China a sudden and apparently  isolated outbreak of a novel respiratory disease arises. There are reports of a cover up by authorities, then external contact with people in China is shut down. Suddenly cases of the disease - Acute Viral Respiratory Syndrome (AVRS) - are popping up in other countries, everyone is glued to ther social media following maps and counters showing the spread... then "October 26. It's here. Two cases in Melbourne, three in Sydney"...it becomes apparent that transmission is possible in the days before symptoms develop... people start trying to isolate themselves, scientists are working on a cure but that could be months or years away...there's speculation about if the disease crossed the species barrier in China or was engineered by pharma as people start to panic and invent conspiracy theories. Looting and hoarding is going on. Watching this chapter unfold in Li's diaries is so similar to how the current Coronavirus COVID19 situation is unfolding it was quite eerie but also mesmerising. Just one example of how this author is great at reading not only the science but also human behaviour and weaving the two into a very believable story.

This author was new to me...but I will definitely be reading more of his books and am eagerly awaiting the upcoming "Ghost Species".