"The Overstory" by Richard Powers

"The Overstory" by Richard Powers 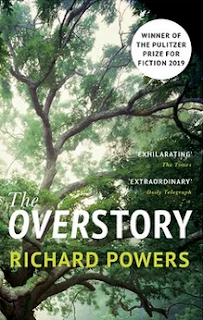 Winner of the Pulitzer Prize for Fiction in 2019, recommended to me by my friend Hannah.

Found/bought a copy at the Orchard Bookshop / Formerly the Adelaide Pop-up Bookshop.

Posted by HappyHobbit at 2:24 AM No comments:

"The Dictionary of Lost Words" by Pip Williams

"The Dictionary of Lost Words" by Pip Williams 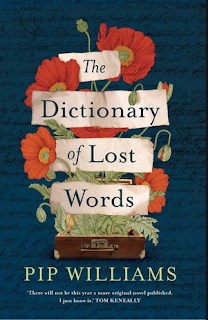 My score: 9.5/10 - way more engaging and interesting than the "Professor and the Madman" and with a lot more details about how the Oxford English Dictionary was actually made, but with a strong feminist slant, looking at which words were included and which were not and why, combined with influences from the suffragette's movement and WW1. It was an 'easy read' 9.5/10, rather than the mind-blowing or deeply intense books I would normally score so high, but it was really enjoyable, covered multiple angles I think were really missed in the "Professor and the Madman". I was keen to read this book anyway as it ticked a lot of boxes for me, Historical fiction, feminist angle, linguistics/etymology, but it also by chance fits into my Aussie Author Challenge for 2020.

Posted by HappyHobbit at 2:17 AM No comments:

"Love and Other Thought Experiments" by Sophie Ward

"Love and Other Thought Experiments" by Sophie Ward 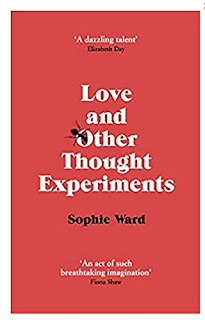 What an excellent, surprising and unique collection of interconnected stories and parallel universes! I interpreted the stories to be thought experiments about consciousness, memory and what it means to be human compared to AI, rather than really about love, although various different relationships are woven throughout the book too. I didn’t know what to expect from this book, although it was long-listed for the Booker prize which suggested it might be good, it surprised me and I really enjoyed it and the philosophical questions embedded in it, even though I'm not generally a big fan of short stories.

Posted by HappyHobbit at 2:01 AM No comments:

"The Professor and the Madman" by Simon Winchester

"The Professor and the Madman: A Tale of Murder, Insanity and the Making of the Oxford English Dictionary" by Simon Winchester. 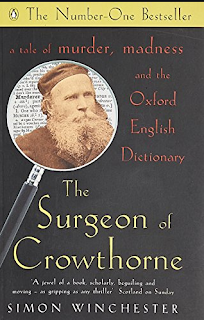 My score: 6.5/10 Really fascinating story and loved hearing how the dictionary came to be made, seems like an impressively large and wonderful example of "citizen science" or linguistic scholarship. There was a fair bit of repetition in the telling, and took a while to really get to the making of the dictionary, as a lot of the book dwelled on the mental state of the Surgeon (William Minor), his sexual fantasies and paranoid delusions and speculations on the causes of these. I was often unsure if this was 'non fiction' or 'historical fiction' as so much of the book seemed to be speculation based on historical notes and focusing on the peculiarities of the Surgeon, rather than the making of the dictionary and his contributions to it. The most interesting part of the story for me was the role William Minor played contributing to finding definitions and quotes for the development of the Oxford English Dictionary while being a long-term inmate of a mental asylum, and the relationship between James Murray who edited/compiled/orchestrated the OED.

I have also heard good reviews about a recent historical fiction book called "A Dictionary of Lost Words" by Pip Williams, which looks at the making of the Oxford English Dictionary from a more feminist perspective, and I am very keen to read that.

Posted by HappyHobbit at 1:41 AM No comments:

"Leap in: A Woman, Some Waves, and the Will to Swim" by Alexandra Heminsley

"Leap in: A Woman, Some Waves, and the Will to Swim" by Alexandra Heminsley 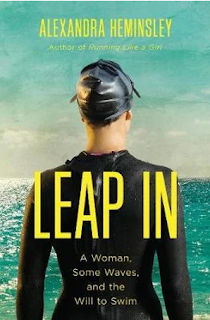 I listened to this as an audiobook with the audible add-on when I purchased this as a Kindle ebook. The audio is read by the author.

I really enjoyed Alexandra Heminsley's first book, "Running Like a Girl", but didn't really connect in the same way with this book. Not sure if that is mostly to do with the fact that I am a runner, and not a swimmer, and so maybe if I had been someone into swimming or newly discovering the joys and challenges of swimming, it might have appealed more. I do admire swimmers, especially ocean swimmers, but have yet to admire it enough that I have tried it myself...I must admit the in-built fear of sharks plays in my mind when swimming, even though I campaign to protect sharks and protest their culling. I also found "Running Like a Girl" was quite humorous, and didn't find the same with "Leap in".

Posted by HappyHobbit at 1:00 AM No comments:

“The Beekeeper of Aleppo” by Christy Lefteri 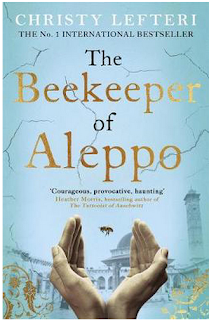 Beautifully written, obviously heart breaking in many places as it is a story following the journey of a couple fleeing Syria and attempting to travel to the UK as asylum seekers. Wish some of the politicians making rules about detaining asylum seekers in off shore detention centres would read this and absorb some humanity from it.

Posted by HappyHobbit at 2:05 AM No comments:

"Dare to do" by Sarah Outen 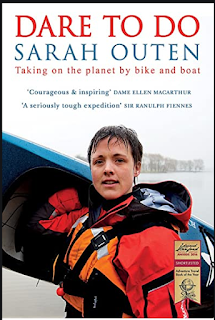 Bought this kindle book (plus audible add on read by the author which is excellent!) after watching the film doco of Sarah’s journey last night (The film is called "Home" you can see a trailer HERE). The film was inspiring yet honest and raw so I think the book will make an impression too.
Started reading: 2nd October 2020
Finished: 16th October 2020

Listened to the audio version, and it was awesome. Inspiring, honest, raw, fun in parts, challenging in others. I also appreciated reading/listening to an adventure like this by a woman, especially a queer woman, and found it very refreshing and powerful and I could really connect with the story in ways that I often struggle to with most adventure stories that more often than not seem to be from straight white men.

Posted by HappyHobbit at 2:00 AM No comments: