"Past the Shallows" by Favel Parrett 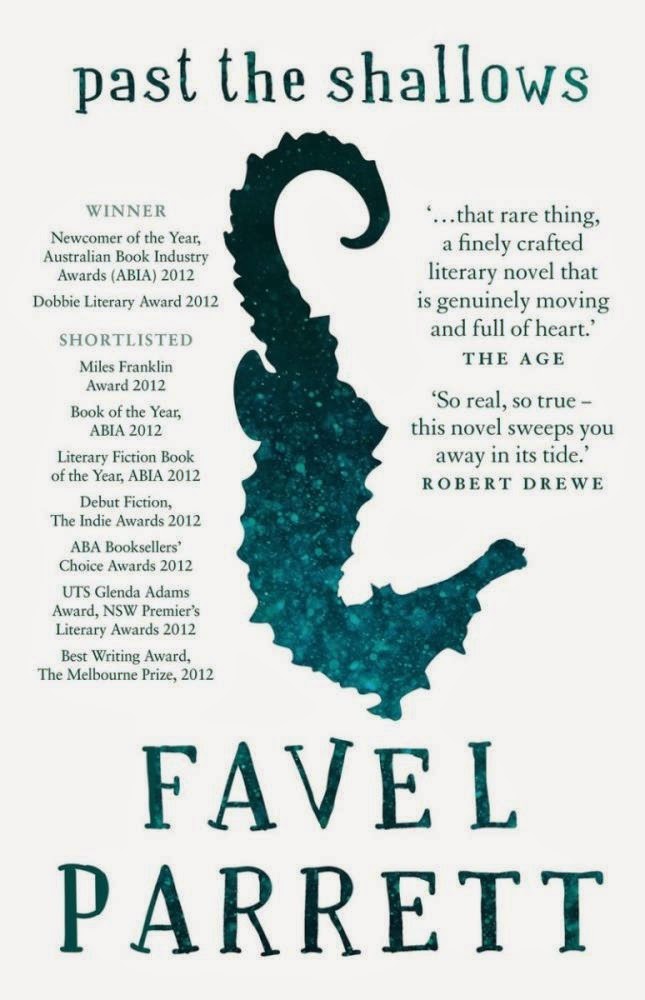 I read "Past the Shallows" as part of the Aussie Author Challenge 2015. This is the second book I have read by Favel Parrett although it is actually her debut novel. I really enjoyed "When the night comes" when I read it last year, but I thought "Past the Shallows" was even better! Not that it is a happy book, it is in fact one of the saddest and most tragic stories I have read in a while, but so beautifully written and captures your emotions. In many ways it reminds me of Tim Winton's style and themes, particularly his book "breathe" which also had a strong fascination with the ocean. I have heard Favel Parrett's work described as "Wintonesque", but this particular book captured me even more strongly than most of Winton's books.

It is again set in Tasmania, and again the writing style is similar with lots of very short chapters, split between two different characters points of view. In this book the two main characters are Miles and Harry, two of three young brothers in a family that is falling apart. The eldest brother, Joe (19 years old), has already left home and is about to sail away on his homemade boat to escape the life he would lead if he stayed behind. The mother is dead, and we find out little fragments of what must have happened as the book unfolds. The father is a no-hope aggressive drunk, a desperate abalone fisherman who is struggling to even put basic food on the table for his kids. He is forcing Miles (13 years old) to help out on the fishing boat in ways that make you feel like the boy is being robbed of his childhood. Harry, who I think is meant to be about 7 or 8 but I'm not sure it's ever actually specified, is often left to his own devices at home while his Dad, Jeff (another unsavoury character) and Miles are out fishing all day. Harry is one of the most touching characters, your heart goes out to him, he is such a loving, sweet kid that adores his brother Miles, and always seems to be doing little things just to make others feel better. Miles is also a great kid, although being put in situations that make him more of a depressed character. I wont go into the storyline as it is quite a short book and I don't want to spoil it for anyone who hasn't read it yet. For me it was the characters of Harry and Miles, their brotherly love and protection of each other in situations neither of them should have had to endure that made this book so powerful and so tragic. You just want to reach out and save them from what unfolds from the pages as you read it.